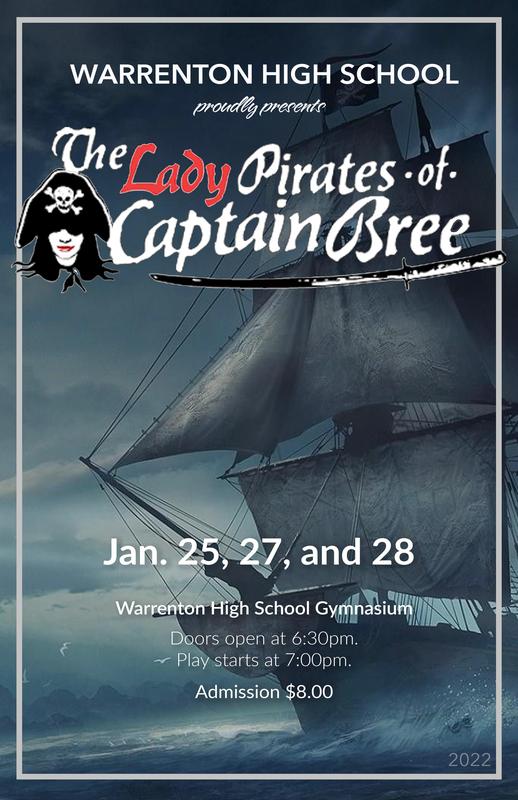 Come Support our Drama program!
Gangway, Pirates of the Caribbean — here come The Lady Pirates of Captain Bree!  When his crew jumps ship upon sighting the pirates in the distance, Captain Jennings is left with a makeshift crew of motley prisoners and Fergus, a sailor who can’t swim, to protect his wealthy passengers, the Prescots, from the inevitable attack.  As the lady pirates take over the defenseless Kayla May, you’re in for swashbuckling musical comedy with a host of hysterical characters on deck and a spectacular Bill Francoeur score.  Along with Captain Bree’ hearty crew of mean and nasty mates (and a couple of new recruits in training who keep forgetting to be rough and tough), you’ll find the haughty Professor Bidwell and the pretentious Madam Prescot constantly battling for special treatment and respect (ha!)  from the pirates, Samuel Prescot masquerading as a girl to avoid becoming shark bait, and Julia Prescot bursting with desire to join the lady pirates — much to her aunt’s dismay!  After the pirates send Thomas, the cabin boy, out to sea with a ransom note demanding gold from the British in exchange for the Prescots’ lives, they amuse themselves by auctioning off the male prisoners to do their dirty work and showing Julia the ropes of pirating.  But what is in store when Thomas returns with a British fleet, set on hanging the pirates for their deeds?  Madam Prescot and Bidwell are equally set on seeing Captain Jennings hang for his defenseless approach to the lady pirates.  Both your cast and your audience will love the swashbuckling ending as the two captains work together to save their crews from the British.
Published January 24, 2023